Motor windings and coils are not always physically identical. An example is concentric wound coils where the size of the coils are different. Another example is when coils are connected such that the stator is not symmetrical from an inductance point of view.

Assembled motors (with the rotor installed) may have stators that are lap wound and electrically symmetrical. However, the rotor may cause the inductance in the stator phases to be different because of the transformer action between the stator and rotor.

To address these situations the Pulse to Pulse Surge Test was designed.

Summary of what the P-P surge test is used for

How the P-P surge test works 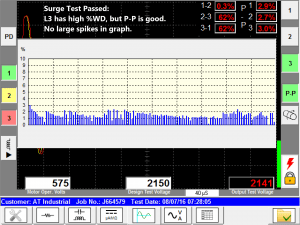 Instead of rapidly going to the surge test design voltage and recording the surge wave after the voltage is achieved, the P-P surge test raises the surge voltage in small steps up to the design test voltage. At each step a surge wave is recorded, and the difference between this wave and the wave from the previous step is calculated. This means that the winding under test is compared to itself as the surge test voltage is raised. Since the comparison is to itself, it does not matter that the phases are different, or that there is rotor influence in an assembled motor. Hence for an assembled motor the rotor does not have to be turned during the test.

If there is an arc or flash over at some voltage step, the P-P %WD will be significant for that step because the wave frequency is different from the previous step. For information on failure limits see Pass/Fail Guidelines. 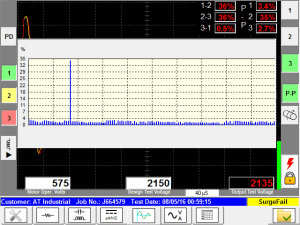 The other alternative for assembled 3-phase motors is to turn the rotor between each surge test so that all 3 waves line up. If they cannot be made to line up properly, there is a failure. Turning the rotor may not always be possible or practical making the P-P surge test a valuable tool.

Bottom line: The Pulse to Pulse surge test should be used in combination with accurate winding resistance measurements any time it is uncertain if the standard surge test is a pass or fail.