What Causes The Differences In The Surge Test Waves?

Using Electrom Instruments Quick Surge© technology, manufacturers can track and trend surge wave signature properties for any unacceptable changes or differences from the golden, known-good, master surge wave signature in each unique stator/coil/winding-based product. Relying on Quick Surge© technology for simple onsite assessment and to manage quality and heavy work loads in the service center, the leading industry MROs can more easily measure, maintain, recondition, overhaul, rewind and rebuild high value machines and critical components to like-new standard. Why is the Quick Surge© Wave Difference (WD) inspection test so important to sustain high quality, and what are the defects or degradation failure mechanisms that causes unacceptable changes and differences in surge test waves?

Using a three phase application as an example, the three waves in the surge test should be close to identical if the three phases are designed to have the same impedance. However, not all machines are designed and manufactured with perfect balance between the phases. (See Pulse to Pulse surge test for further information on how to avoid false positive results in concentric stators, assembled power transformers and other designs with asymmetric inductive coupling etc.) In three phase machines designed with symmetric impedance, the wave frequency and zero crossings will be different in the phase(s) affected by a hard short, or if arcing is occurring due to weak insulation. The amplitude of the wave may also change. 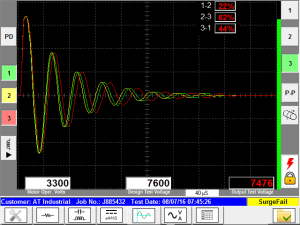 Inductance L: The inductance, L, will go down when there is a turn-to-turn short in the windings. L is proportional to the square of the number of turns in the winding. As L goes down the frequency, f, goes up. An increase in f shifts the wave’s zero crossings to the left on the surge test screen.  Likewise, if there are other problems in the windings that can be found with a surge test, the inductance will change. Connection problems for example may add or subtract inductance to the circuit. Or, they may cause the electric fields generated in the coils during the surge test to oppose each other, effectively reducing the overall inductance.

When the insulation is weak, a change in inductance will only show up at elevated voltages. Consequently, it will not be detected in low voltage tests and measurements. The surge test reduces false negative results, which is why the surge test is so valuable. If the surge test is done above the peak voltage the motor operates at, early warning of problems to come may be detected. The motor may still run fine for a while if the weakness shows up at a voltage above the peak sinusoidal operating voltage.

Capacitance C: The capacitance does not change much with most turn-to-turn shorts. However it can contribute to the change with more massive failures.

Analysis tools other than the %WD or EAR (error area ratio) exist. These are all mathematical tools. The %WD/EAR is the most common and best tool along with the good old visual inspection which should always be done when practical.