What is Partial Discharge & Why is it Bad?

Definition of Partial Discharge:  A discharge that only bridges part of the space between two conducting elements.

Partial Discharge is one of the predominant drivers of long-term degradation and eventual failure of electrical insulation. The PD energy dissipates mostly as heat, but also as sound and light. Insulation materials degrade when overheated. Although the partial discharge energy can be small, it can take place in the same location hundreds or thousands of times per second.

In addition, ozone that attacks the insulation is created in the process, cracking associated with a chemical breakdown of the insulation can occur, and the electrical conductivity of the insulation surrounding voids in the insulation system can increase. PD can also cause “treeing” in cable insulation. Treeing is multiple partly conducting discharge channels expanding over time, like the branch of a tree that grows.

With inverter drive power systems applied incorrectly, the localized Partial Discharge can occur several thousand times per second, and in severe cases cause a motor to fail within hours, weeks or months.

Bottom line: Partial Discharge can cause progressive deterioration of insulating materials, ultimately leading to electrical breakdown. Note that especially in high voltage equipment, low levels of PD may be fine. More on this below.

When and Where Partial Discharge Takes Place 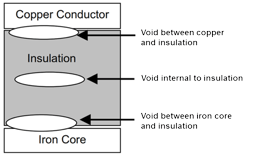 As shown in the picture, the voids can be in any location. With layers of insulation, the opportunities for voids between layers grow.

Partial discharges on the surface of the insulation can also occur. Used rotating equipment usually has some layer of contamination on the outside of the

insulation. If this “dirt” or moisture is not uniform or continuous across the insulation surface, discharges can take place on the surface. This is especially true if there is a contaminated insulation crack or high conductivity path from the conductor to the surface of the insulation as shown in the picture below.

Small discharges or “spewing” of electrons from a sharp point to air can be measured when the voltage is high enough. The humidity in the air influences at what voltage this happens. A sharp point can, for example, be the end of a single cable strand. Electrom Instruments has also observed and can measure discharges from small scratches in magnet wire for low voltage motors.